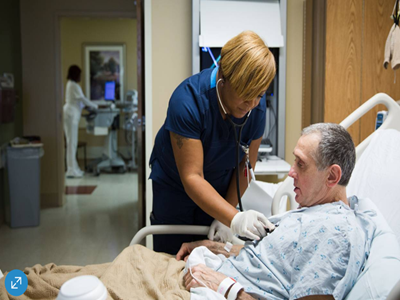 The job market is heating up for nurses in many parts of the United States, according to a new article from The Wall Street Journal. While national data shows a stable nursing workforce, several regions in the U.S. – including Pennsylvania, Florida, Nebraska, Iowa and Texas – are documenting shortages as they experience fast population growth and expanded healthcare coverage under the Affordable Care Act. Nurses are also exiting the workforce faster than they are entering, creating a gap in the healthcare employment market.

Growing demand is good news for nursing students like Sandra Brown, who graduated from Chamberlain College of Nursing in April. Sandra spoke to The Wall Street Journal about her experience with the job market. As she prepared to graduate, she received “phenomenal” interest from potential employers.

Sandra is now working at WellStar Health System in Atlanta, where she received a pension, sign-on bonus and concierge services with her employment offer. WellStar let her choose from several openings, with additional on-the-job training, to ensure her growth and success in her new role. Around the country, hospitals in particular are getting creative to fill nursing positions. One health system in New England encouraged staff nurses to broadcast news of its signing bonuses to prospective nurses via social media. Others are increasing wages.

The Wall Street Journal notes that the demand for nurses will continue – and, in some areas, increase – under a “retirement wave.” As the economy improves, experienced nurses are retiring or cutting back hours, creating openings.

Read the full article here, and share your thoughts in the comments!