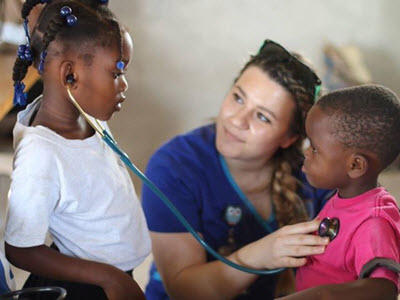 While a student in Chamberlain’s Master of Science in Nursing program, Sheri Sawchuk traveled to Haiti to help with disaster relief following the devastating earthquake in 2010.

Nearly six years later, Sawchuk returned to Haiti for two weeks this January. Now an assistant professor at Chamberlain, she brought along 12 nursing students as part of the Global Health Education Program’s first trip to the nation.

Throughout the visit, Chamberlain students were partnered up with nursing students at the Faculté des Sciences Infirmières de l'Université Episcopale d'Haïti (FSIL), the first four-year baccalaureate school of nursing in Haiti.

“The Haitian student and Chamberlain student cared for patients together,” Sawchuk said. “It was such a neat collaboration seeing them communicate together and teach each other, all while trying to find out what is wrong with their patient and how to best care for them.”

The group set up six mobile clinics in communities around Haiti. At an orphanage, the students did health assessments of all the children and started growth charts to track their progress into the future. Chamberlain student nurses also spent half a day at a birthing center, worked a shift in the local hospital alongside a Haitian nurse, and taught CPR and first aid out in the community.

“We got to work in the local hospital, but more importantly we went out in the community and we worked in clinics,” said Callie Strickland, a 3-Year Bachelor of Science in Nursing student at the Jacksonville campus. “We worked with nursing students from FSIL in community clinics where we literally threw up a clinic in someone's yard and 200+ patients per day were seen and treated by doctors and nursing students.”

By the end of the two-week trip, the group had treated more than 1,000 patients.

“You’d think after five or six days you’d be exhausted, but you just want to go back for more,” Strickland said. “We left there, all with the same thought – our lives will never be the same. We will return to Haiti, hopefully as a group.  Nursing has no borders.”

One community visit in particular has stuck with Strickland since the trip. She encountered an elderly patient who was complaining of general weakness, lack of appetite and depression.

“We found out her only son had committed suicide just a month before,” she said. “As nursing is holistic and knowing that the effects of mental health span to the entire family, I was able to speak to her about my experiences having had a brother commit suicide. When our consult was over, she said she felt so much better.”

As they closed their clinic for the day, Strickland wondered if she had truly been able to help the woman due to the communication barrier.

“I walked through the community to see the town and the elderly woman came from her house crying and saying, ‘Thank you, thank you,’” she said. “She walked straight to me and hugged me, the biggest hug I had ever received. She understood me and I had helped her. Really, she had helped me.”

Learn more about the Global Health Education Program at Chamberlain.