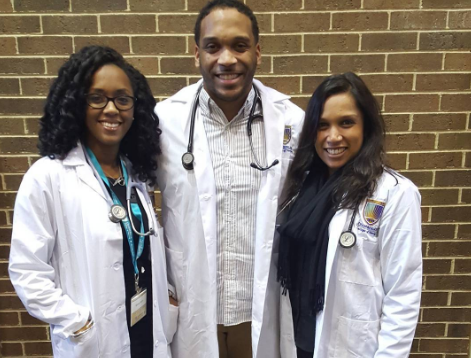 The practicum experience in Chamberlain’s MSN – Family Nurse Practitioner specialty track is designed to expose you to diverse patient populations from birth through end of life.

The hands on-experience assessing diagnosing and treating a variety of conditions is invaluable in growing into a well-rounded practitioner. However, students often find it takes more effort than they expected to secure preceptors in their area. We spoke with eight graduates of Chamberlain’s FNP specialty track to get their advice for identifying and securing FNP practicum sites.

1. Network with other nurse practitioner students

Jacob Garcia had no issues finding his practicum sites – largely because, he didn’t have to reinvent the wheel.

“I knew a few people in San Antonio who went to Chamberlain and they gave me recommendations,” he said. “The same sites they studied at precepted me. It was all networking.”

Several other students cited this as the most successful tactic they used in securing a site.

“I had the most success just talking with friends who were also in NP programs and asking them who they used,” said Craig Philhower. “I would then contact them directly and use my friends as personal references. One of my friends in another program suggested using one of her preceptors, as he was friendly and liked taking students. He was able to take me and I stayed with him for three rotations.”

For students who don’t work in clinics or hospital – this can be a great tactic. Start early looking for people in your city that have gone through the program and connecting with them.

If you’re a practicing nurse, you already have a great network to start discussing your plans with. Even if you know a provider can’t take you, ask them if they know someone who might.

“I worked in the operating room at my old hospital so I knew a lot of doctors that had practices,” said Jaclyn Hamlin. “Talk with the doctors you work with – they are all friends with other doctors. Some of them would say, ‘Oh, I can’t take you, but I know another OB/GYN that might.’ That was really helpful.”

As a practicing nurse, Sarah Magula also networked with physicians in the area ahead of time to secure her sites.

“I really just can’t stress enough to be assertive,” she said. “Even if a student comes into the program with only one year of nursing experience, you still interact with doctors in that amount of time – those are going to be your prospects for practicums.”

The practicum site search could also start with your personal healthcare provider – and make sure to ask friends and family for referrals to their providers as well.

Among all the students we interviewed, one piece of advice for finding a FNP practicum site was unanimous: START EARLY.

How early can depend on the strength of your network, and how many placements are available in your area. For Philhower, who lives in the D.C. area, he wished he had started his search a year in advance.

“The benefit of living in Northern Virginia is there a ton of locations, but the downside is that there are also a ton of schools and a lot of the spaces are used for medical students and other nurse practitioner programs,” he said. “A lot of the places I called were willing to accept me, but they were booked out for the next 12 months. They told me they would put my name on the list and call me back. That didn’t work at all for me.”

4. Tell anyone & everyone you’re looking for a FNP practicum site

Sarah Magula recommends sharing that you will be looking for a practicum sites from Day 1 in the program.

“I ran into different mid-levels throughout the program and they would tell me where they went for different rotations,” she said. “Put it out there and get feelers to find out what everyone in your area did, what doctors are more receptive to teaching, what hospitals are teaching organizations.”

You truly never know who might be able to connect you with a site. Philhower found one of his sites after helping a woman who was stranded by giving her car a jump.

“I asked what she did and she told me she was a nurse practitioner at a pediatrics office,” he said. “I told her I was looking for a clinical preceptor and she said, ‘Well, one good favor deserves another. Give me a call when you’re ready.’”

Starting early can sometimes feel difficult, as nurse practitioners and other providers are so busy.

“They will say things like, ‘Oh you’re a year away? Sure, that will be fine,’” said Tia Carrington. “They might put you on the back burner for a while.”

Once you get that “yes,” your job isn’t yet done. Philhower recommends regularly reaching out to the office to ensure the placement is still set.

“If you’re a year out, call them back every three months to verify everything is still going so that you don’t shaft yourself,” he said. “From six months on, you should be calling every month. As long as that happens, you should be fine – don’t wait and think everything will be fine.”

6. Show up in person

While Magula found most rotations through networking, she had to turn to cold calls for her OB – Maternal Women’s Health class. Living in an area saturated with NP and PA programs, she found that local offices were being bombarded with calls – and oftentimes didn’t even get her message.

“So many people told me no,” she said. “There was one office who wasn’t calling me back so I showed up at the office with a baked goods tray and asked them. The tray cost me like $30, which is really not a lot for the experience I gained from that rotation. I’m not saying you have to be pushy, but if you want that experience, you have to go out and chase it down.”

Melanie Hendrix recommends calling and making an appointment to see the potential preceptor in person – and dress for success, wearing what you would for an interview. Jaime Henson agrees.

“My advice for finding a practicum site is to start early, have a back-up plan and ask people face-to-face,” she said. “I actually went to my PCP and asked him face-to-face if he could precept me for a rotation.”

7. Be persistent when cold calling

When networking isn’t working, cold contacting providers may be the only option. Aarti Mehta found her practicum sites exclusively through cold calling – which required persistence.

Henson found several of her rotations by searching for nurse practitioners in her hospital system’s email system and “cold emailing them.”

“I explained who I was, the expectations of clinical, the timeframe I was hoping for, that I was an employee, and last but not least I offered the incentive for their benefit – precepting counts towards the bonus structure at my organization,” she said. “I had several unable to for various reasons, but received enough ‘yeses’ to complete my rotations.”

Track who you are reaching out to – including their name, date of contact and type of outreach. This can help with follow up.

Important information about the educational debt, earnings, and completion rates of students who attended this program can be found at www.chamberlain.edu/gemsn.