After 16 Years in Nursing, RN Finds There’s Still So Much to Learn 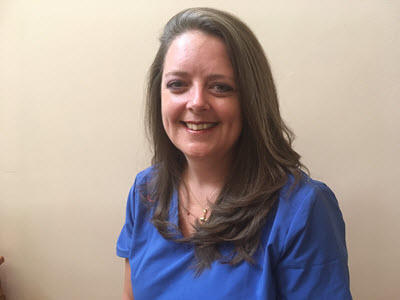 In her 16 years as a nurse, Mandy Larson, RN, a student in Chamberlain’s RN to BSN Online Option, has connected with countless patients and their families.

Few cases have touched her – or allowed her to provide as much skilled, compassionate care – as that of a baby she cared for last spring in the pediatric intensive care unit (PICU) at Medical University of South Carolina.

With a genetic disease affecting his nervous system and muscles, the little boy had progressively lost the use of his diaphragm.

He had been in and out of the PICU for months and could no longer breathe on his own. Little viruses were setting him back further and further.

Finally, seeing that he was not getting better, his family made the heart-wrenching decision to remove him from the ventilator.

On the day he turned six months old, hospital staff removed his breathing tube. As the little boy took his last breaths, Larson knelt on the floor, helping his mother cradle her son – something she hadn’t been able to do during his lengthy hospitalization.

“I sat there, encouraging her and Grandma, wiping their tears because they couldn’t get their hands free,” she said. “They were doing the right thing, but it was taking a little longer than we thought it would. I had to encourage Mom to keep holding him – at one point she said, ‘I can’t do this, somebody else has got to hold him,’ and I said, ‘He’s OK, you’re OK. Just love him into heaven.’”

Larson’s skill and care during that difficult time earned her the praise of her fellow nurses and the DAISY Award for Extraordinary Nurses.

She’s not in it for the awards, though – it is the everyday opportunity to provide skilled, compassionate care that inspires Larson to continue.

A Love for Learning on the Job

Interestingly, Larson didn’t plan to become a nurse. She earned her cosmetology license while still in high school and trained later as a radiology technologist.

“But I liked the intricacies of nursing, and the care and compassion that I saw nurses showing to patients,” she said. “It just sucked me in. I was done from there – I was going to be a nurse.”

Larson began her career on a pediatric med-surg floor at Medical University of South Carolina. A colleague’s invitation to visit the neonatal intensive care unit (NICU) set her career on a different path.

“I came up and visited one day and thought, this is fantastic. The things in there, the technology they have – it was intriguing.”

Larson spent 13 years in the NICU, enjoying the opportunity to take on different roles and learn new skills. She served as stabilization nurse, responding to high-risk deliveries. She flexed her leadership muscles as charge nurse. She learned to place central lines in babies weighing less than a pound, and operate the ECMO (extracorporeal membrane oxygenation) heart-lung bypass machine in units throughout the hospital.

Above all, she balanced the science of nursing with the art of care and compassion.

“There were days when babies would pass away, but the compassion that I and my fellow nurses would show to the families was so important. On the flip side, you’d see babies that graduated from the NICU and get out and be OK. That’s why I do what I do.”

In 2013, a series of shifts operating the ECMO in the pediatric intensive care unit (PICU) led her to consider a change in direction.

“Those nurses over there, the knowledge base that they had – wow, the diagnoses that they see are so vast,” she said. “I thought, I want to learn this, I want to do this. So I switched to the pediatric side.

“Now in the PICU, I’m treating patients from newborns to age 17. We see everything from traumas to cancer to viruses. I was drawn into it so I could learn so much more. It’s been three years, but I’m still learning. I am so impressed by the nurses that I work with because they’ve been doing this so many years, and I get to draw on their knowledge base.”

Next Step: Advancing Her Education

Even with all of the on-the-job learning, Larson still decided to go back to school and earn her bachelor of science in nursing (BSN) degree at Chamberlain College of Nursing.

“These days, the hospital is requiring a bachelor’s degree, and even though I was grandfathered in with my associate’s, I saw how other nurses my age who were in nursing as long as I have been were doing it. I didn’t want to be left behind. That led me to Chamberlain.”

First, however, she first had to overcome her own hesitations. She said she asked herself, “Can I do this? Am I smart enough to do it?”

Now that she’s halfway through the RN to BSN Online Degree Completion Option at Chamberlain, the answer to both questions is a resounding ‘yes.’

Larson said she enjoys the support from her professors and the flexibility of being able to schedule her studies around her schedule and her life.

Above all, she said, “I love learning from other students who are working in other areas. I find that that I’m drawing on the experiences of other people, wherever they work. For example, sometimes there are things that we always complain about at my hospital, and then I talk to a nurse in one of my classes who doesn’t have it as good as we do. It makes you think about things differently.”

Less than a year away from completing her BSN, Larson is contemplating her next move.

She’s keeping her options open, but would also be happy to stay right where she is in the PICU – advancing her own knowledge and providing the kind of care that makes a difference.

“I’m still learning so much and want to continue to keep learning more every day.”

Important information about the educational debt, earnings, and completion rates of students who attended this program can be found at chamberlain.edu/rnbsndisclosure.