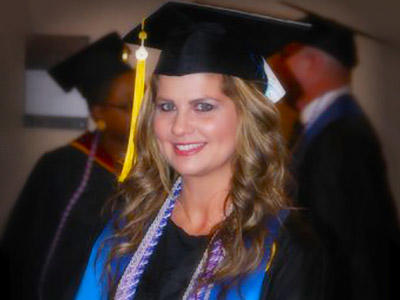 Tara Adams graduated from Chamberlain College of Nursing with her Bachelor of Science in Nursing (BSN) in August of 2014. She became an official Registered Nurse on October 6th that same year, after answering seventy-five questions on the NCLEX in approximately one hour.

Reflecting on her education, she said she learned a lot through Chamberlain. There were lessons which came from the materials and instructors and those which came from experience. “I’ve always been a fast test-taker. But I learned in my Adult Health course that if I lingered on a question too long, I would change my answer and that didn’t work out majority of the time. I knew I couldn’t afford to second-guess myself during the NCLEX, so I answered a question and moved right on to the next.”

Adams was scared of taking the NCLEX, saying it seemed that every second of her life for the last three years was spent preparing to pass that test. It wasn’t easy, but she felt like she had been prepared.

“I’m proud to have passed the NCLEX on my first try,” she said. “And I have my professors and the program at Chamberlain to thank for that success. There were times I didn’t think I would even finish. Chamberlain always made sure that I had the resources I needed to get through my toughest times. Even when I wasn’t sure which resource I needed, there was always someone to ask. The faculty and students at Chamberlain became my family away from my own.”

For Adams, getting through nursing school was challenging as she balanced her home life with her education. “I have three children and a husband who’s away a lot for work,” she said. Additionally, she had several set-backs during nursing school. Her daughter broke her arm had to be hospitalized for a week for possible compartment syndrome after surgical repair. Her son is a severe asthmatic and was hospitalized three times with hypoxia. And her husband had major back surgery and subsequently lost his job. “It was a very tough three years.”

Her balancing act meant making sacrifices. Adams felt like she missed many milestones with her children. “I have never done anything harder, but I knew that it was for them. And when I spoke at graduation, my daughter cried nearly the entire time and afterwards told me she was so proud to have me as a mom. And my youngest smiled and waved at me while I was on stage. It was a tough road but so very worth it!”

Adams said her biggest take away from her time with Chamberlain was that, although nursing school is difficult and you are bound to have setbacks, it is possible to come out on top and definitely worth the effort.

She currently works in the critical care unit (CCU) of a hospital and said that many times when she’s in a patient’s room, hooking up an IV or checking a drain, she’s taken back to her days at Chamberlain and reminded of how well she was taught.

“I think about something one of our professors said to us or I remember something important that could help me treat my patient and I am grateful that I went to Chamberlain. They made me a good nurse.”

Very early on, Adams found out how good.

On her third day of working her first job as a nurse, her patient experienced cardiopulmonary arrest, or “coded.” “I remembered my critical care professor telling us that when we really wanted to panic, we needed to step back and think, ‘What do I need to do first?’ and that’s what I did.”

Before the swarm of doctors, nurses, residents, respiratory therapists and techs entered the room, Adams went through the critical steps in her mind of what to do. She dropped and deflated the bed, pushed the code button, yelled for help and started doing chest compressions. She talked to the patient, counted compressions and talked to people that entered the room. “I felt scared, but also focused because I knew that certain things needed to be done.”

After the code was over, one of the other nurses commented to Adams, “Welcome to the CCU.” A doctor that was leading the code team overheard and asked Adams if she was new to the CCU.

“I told him that I was not only new to the CCU team, but that I was a new nurse,” she said. “He asked me where I had graduated from and when I proudly said, ‘Chamberlain,’ he smiled and said, ‘No wonder!’”

He told her that he would never have known she was a new nurse.

When he then turned and walked away, Adams felt elated. The doctor later told Adam’s nurse manager how impressed he was with the way she handled the code. She couldn’t help but feel positive.

“Chamberlain has been a source of pride for me again and again. I am so happy that I chose to go back to school during one of the toughest times of my life. I am delighted that I kept up my grades and kept an academic scholarship despite the curveballs life kept throwing me. I proudly wear my Chamberlain BSN pin on my work ID because people recognize it as a great school that produces extraordinary nurses.”

When asked about her future plans as a nurse, Adams enthusiastically said she’s returning to Chamberlain for her Master of Science in Nursing (MSN) in May of 2015 and knows she’ll continue to feel fulfilled when she does.