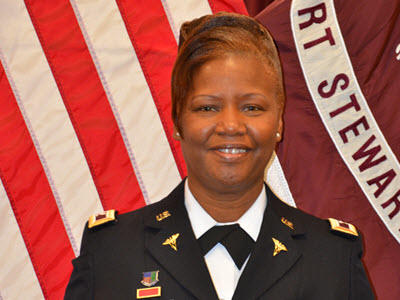 It’s a career that she loves, but one that she didn’t originally intend to pursue. Nursing started out as a practical choice – she was a single parent and needed a way to support her child.

After becoming a licensed practical nurse (LPN), however, Cole discovered that she loved nursing. She went on to complete her associate’s degree and worked as an registered nurse (RN) in a variety of specialties – including orthopedics, psychiatric and medical-surgical nursing – in her hometown of Pensacola, Florida.

It was during a stint on the oncology floor that Cole received the advice that changed the direction of her life.

“I had a coworker who was a Navy nurse and was moonlighting at the hospital. She asked me if I had ever thought about the military. I told her absolutely not,” she said, laughing.

Still, the promise of higher pay and the opportunities to travel piqued her interest. Cole spoke with recruiters and learned more. After earning her Bachelor of Science in Nursing (BSN) degree, she signed up with the Army, entering at a rank of 1st lieutenant.

“My original plan was to stay in only three years,” she said.

Twenty-six years of service later, Cole explained that she still loves the opportunities that the Army provides for nurses to rise in rank, work in a variety of settings and further their training.

Her primary specialty (Military Occupation Specialty or MOS) is in preventive medicine, with nurse practitioner as her secondary MOS. She’s been stationed all over the country and at bases in Germany. She has also participated in a variety of humanitarian missions, including service after Hurricane Katrina in 2005 and preventive operations during the Ebola crisis in 2015.

Now in a clinical operations position and stationed at Shaw Air Force Base in South Carolina, she regularly travels to the Middle East to help oversee Army medical facilities in countries such as Kuwait, Qatar and Jordan.

Like any nurse, Col. Cole also values the opportunities she’s had to impact her patients and their families. She explained that over her career, the patient who has stuck with her most was from her first assignment, at William Beaumont Army Medical Center in El Paso, Texas.

There, she had a seven-year-old patient, Leah, with a rare form of cancer. During the course of Leah’s treatment and eventual passing, Cole bonded with the girl’s mother, Rosalyn.

“I went to a conference many years later, and who should I run into but Rosalyn,” she said. “She was so impressed with the care that Leah had received from us that she went to nursing school and joined the military as an Army Nurse Corps officer.”

Today, Col. Cole continues to impact future generations as an adjunct professor in Chamberlain’s post-licensure programs. She also continues to advance her own education, having earned her Doctor of Nursing Practice (DNP) degree from Chamberlain in March 2015.

“It’s opened up so many doors,” she said.

She’s due to retire later this year and is currently pondering her next step. For now, though, if you ask her how she feels about her career, she’ll give you a straight answer.

“I love military nursing. I love being a Nurse Corps officer.”