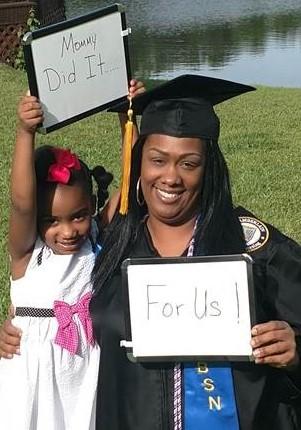 Sonyette Walker, BSN, RN, always had a feeling nursing would be her destiny.

Both of her parents worked at hospitals for over 35 years, her mother as an RN and her father as a physician’s assistant in cardiology. When she was still in high school, she told them she had made her decision: She planned to be a nurse when she grew up. They happily threw their support behind her.

It wasn’t long before she learned that life has a way of making its own plans. Sonyette was working toward her nursing degree at Georgia Southern University when she got the call from home—her mother had unexpectedly passed away.

Distraught, she processed her sorrow with help from grief counselors, whose compassion inspired her to pursue a career in counseling instead. Soon Sonyette had switched her major to psychology and put her nursing dream on hold.

Although she enjoyed grief counseling, she soon realized it wasn’t where she belonged. She felt the same about subsequent positions as a probation officer and licensed realtor, and a job she took later for a large cable company. Years after professing her desire to become a nurse, Sonyette’s dream seemed farther away than ever.

“I felt like I was missing something in my life,” she said. “Like I wasn’t yet fulfilling my God-given purpose.”

She had no idea that what she was missing was waiting just around the corner.

“Back to Where I Belong”

The happiest day of Sonyette’s life was when her daughter, Haven, was born. But something else special happened that day: She found her drive to become a nurse again.

“When my daughter arrived, the nurses in the hospital gave me the best care,” she said. “They really inspired me. So, I applied for nursing school at Chamberlain University.”

Sonyette was back on track at last, but knew a tough journey was waiting ahead. Juggling work, school and motherhood would be hard enough. But she also had no idea how she would pay for classes because the grant she applied for had yet to accept her.

“I was a single mother; I couldn’t work and go to school and do clinicals,” she said. “I didn’t know how I was going to make it.”

Her employers at the cable company didn’t offer much sympathy. Quite the opposite; they let Sonyette go during a round of layoffs. However, when they called to break the news to her, they didn’t get quite the reaction they expected.

“I was the happiest person around!” she laughed. “Sure, I was worried too… but I knew this was God’s plan. He was pushing me to go after my dream.”

If she needed another sign, she got it when the organization funding her grant finally responded. She had been accepted, and her nursing school costs would be paid in full.

“When that happened, I knew once and for all that this path was for me,” she said.

Though Sonyette was confident in her decision to return to nursing, even she was surprised by just how perfectly the work fit her skillset. In her first job at Wellstar Atlanta Medical Center’s South Campus, she quickly established herself as a rising star.

She won several awards, including Nurse of the Year, Charge Nurse of the Year and Preceptor of the Year for Wellstar, as well as the Nurse First Award and The DAISY Award® for Extraordinary Nurses. She also landed positions as a leadership chair and Chamberlain advisory board member, where she could give back to the school that helped her find her way.

“By the time I graduated from Chamberlain, I was more prepared, a little tougher, and more able to think critically,” Sonyette said. “Chamberlain supported me without ever making it too easy. They gave me the tools to be extraordinary from the start.”

Sonyette eventually moved on to her current position in critical care at Atlanta’s Grady Memorial Hospital (where she started on her mothers’ birthday) and still picks up shifts for Wellstar at its Windy Hill location in Marietta, Ga. Both hospitals are especially grateful to have her now that Georgia has become a hotspot for the worst pandemic in generations.

Shortly after Georgia state officials announced that masks would not be required in public, the COVID-19 patients began filling up local hospitals. For Sonyette, who has already caught COVID-19 herself—twice—it was extremely frustrating to see her fellow Georgians ignoring such simple protective measures.

“It makes me angry to see people not wearing masks,” she said, “because until we take this virus seriously, it’s not going anywhere.

That anger turns to worry when she thinks about her fellow nurses, many of whom are working long hours with a short staff to get patient numbers back under control. Some days it feels like a losing battle… but Sonyette knows it’s one they can win if they support each other and keep a hopeful attitude.

“It’s hard for everybody, but you have to keep your head up and stay encouraged,” she said. “Most of all, I think nurses need to encourage one another. We have to help and look out for each other.”

Nurses everywhere would be wise to heed her words. Staying encouraged and hopeful when the future is uncertain is something Sonyette Walker knows all about.

We appreciate your commitment to the continued well-being of our Chamberlain community and support during this unprecedented time. Please visit the Chamberlain University website for the latest updates regarding COVID-19, and be sure to share your own message of appreciation for healthcare workers on the Wall of Gratitude at our Care for Caregivers website. 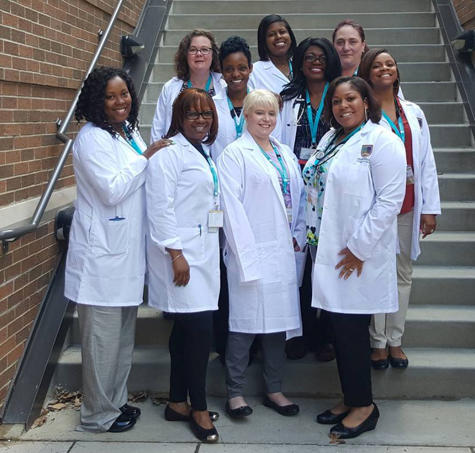 If you ask a nurse practitioner why they chose the field, you’re likely to get answers like these: they love working with patients and their families, it’s exciting, there is so much to learn and new treatments and practices are being discovered.