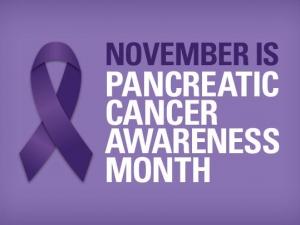 At diagnosis, those suffering from pancreatic cancer have a five-year survival rate of just 5.8%, according to the National Cancer Institute. The Pancreatic Cancer Action Network® (PanCAN) anticipates that the disease will move from the fourth to the second leading cause of cancer death in the U.S. by 2020.

Every morning, her husband, David, took his bicycle out for a five-mile ride. At the end of last year, he came home after just two miles, knowing something was wrong.

Within the next few months, he would be diagnosed with pancreatic cancer and lose his battle with the disease.

For the Pugh family, it was a heart-wrenching loss of a man who paid attention to his health, going for regular check-ups and maintaining a healthy and active lifestyle. Pugh was shocked by the lack of early detection screenings or effective treatments available, and decided to dedicate herself to pushing for more research, funding and awareness around the disease.

“You don’t know you have pancreatic cancer until you’re dying with it,” Pugh said. “As nurses, we teach others to take accountability for their health. Pancreatic cancer doesn’t allow you to do that.”

Students on campus rallied around Pugh and showed their support for the beloved professor by spreading awareness. The National Student Nurses Association (NSNA) on campus hosted a pancreatic cancer educational event this month, which culminated with the planting of an oak tree to memorialize David Pugh. Ryan Navarro, NSNA president at Chamberlain’s Jacksonville campus, said it was their way of giving back.

“Professor Pugh has been nothing but an inspiration to many students, including myself,” he said. “She shows her passion as a nurse and the importance of caring by being more than a professor to her students.”

Motivated by Pugh’s experience, Jacksonville BSN student Shamira Gelin, program chairperson of the NSNA, decided to take on the role of education and outreach coordinator for PanCAN’s Jacksonville affiliate. In her new role, she will lead a team of volunteers in building relationships with hospitals, clinics and healthcare professionals to better educate and inform the public about pancreatic cancer.

Eventually, Gelin hopes to expand the efforts of the Jacksonville students to Chamberlain campuses nationwide.

“Something has to change, and the only way we do that is to make the world aware,” Gelin said.

Learn more about pancreatic cancer from the Pancreatic Cancer Action Network, and click “Share” below to spread the word.