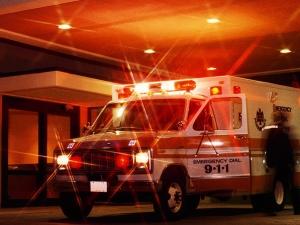 During the fury of Hurricane Sandy, nurses at NYU Langone Medical Center kept calm and carried on, despite it all.

Chamberlain College of Nursing MSN student and RN-BSN alumnus Stephen Markley, RN, a care manager at NYU Langone Medical Center, was at a friend’s house when he heard that the center was being evacuated after backup generators failed. Unable to confirm the news, he made the decision to travel to the hospital through the storm.

“Immediately, my heart just went out to my colleagues and fellow coworkers,” Markley said. “The phone lines were dead, email was down. I ended up heading to the hospital — I was determined to get there.”

It was eerily dark in Manhattan. During the height of the hurricane, which brought winds over 70 miles per hour and storm surges that reached 12 feet, not even the traffic signals illuminated the city.

Markley hopped in a cab and went as far as the driver was able to take him. From there, he ran the rest of the distance to the hospital through the storm.

Over the next several hours, Markley personally helped carry four ICU patients, two babies in the NICU and one child in pediatrics down 15 flights of stairs to safety. The efficient evacuation efforts of the center’s medical staff gained praise from the nation, all the way up to U.S. President Barack Obama.

Dooley worked until after midnight Sunday evening, preparing a triage list of patients that had been identified as potential discharges.

“We were working against the clock; Sandy was anticipated to hit full blast Monday afternoon,” she said. “The ambulances were lined up outside the facility ready to receive as many patients as possible for transfer or discharge.  We met with our respective teams to quickly triage the patients, write discharge orders, fill prescriptions, pack belongings and move out as many patients as possible.  To say that it was a frenzy of activity is an understatement.”

Dooley was released from work to travel home to Long Island at a few minutes before 2 pm Monday.  All power and communications were lost that evening, and she didn’t hear of the evacuation until the next morning.

When Markley arrived at the hospital around 10:30 pm Monday, he was assigned to help discharge patients. He saw the exhaustion of the nurses, and with his background in critical care, quickly made his way to the 15th floor to help with the medical and surgical intensive care patients and infants suffering from cardiac issues.

Markley and other nurses continued caring for patients by the light of flashlights and cell phones, in some cases manually assisting patients’ breathing with handheld bags.

Eventually, they conducted a harrowing evacuation of patients, many who were vented and on multiple drips, down 15 flights of stairs in darkened stairwells.

“It was a surreal event. When you’re in nursing training, you learn these evacuation techniques, but you never think that’s going to happen,” Markley said.

As in any emergency situation, medical staff remained calm throughout the ordeal, as did patients. Patients were appreciative of the nursing care they received during the evacuation, offering a “thumbs-up” when they got to street-level, Markley said.

“We had some awesome experiences with the patients when we got them all the way down,” Markley said. “They were high-fiving us, saying ‘thank you so much.’”

The praise didn’t stop there. President Obama recognized the NYU nurses in an address, saying “For when the storm was darkest, the heroism of our fellow citizens shone brightest.”

While the story of their harrowing evacuation caught the nation’s attention, the nurses’ focus that night was where it always is: on their patient’s safety. Their teamwork led to the safe evacuation of the facility with no fatalities.

“The evening reinforced for me what nursing is all about: the commitment to a patient-centered environment and patient safety,” Markley said.

Currently, hospitals in New York City are either closed or operating at 130-140% their normal capacity.

“We were one of four facilities that were evacuated that night, causing a severe overburdening of our area hospitals,” Dooley said. “As our facility repairs itself from the damage brought by Sandy, our care teams are tentatively planned for dispatch to our temporary patient assignments throughout New York City at the many hospitals that received the former NYU patients. As nurses, we will certainly rise to the challenge!”

Learn more about how you can help from the Hurricane Sandy Relief Foundation.