During his second deployment to Iraq, Bryce Howe encountered a 10-year-old boy with second degree burns that covered his arms and torso.

The cause of the boy’s burns wasn’t entirely clear, but his pain was evident. With dirtied bandages, he was also on his way to an infection.

The squad’s corpsman asked Howe to hold the boy down so that he could clean his wounds and bandage him.

From that day forward, Howe’s squad would do a patrol to the boy’s house every two weeks. The routine was the same – the corpsman would treat the boy and Howe would assist him in any way he could.

“Over the course of about six months, we helped him recover,” Howe said. “It was the most rewarding thing I’d ever done.”

The boy made an equally momentous impact on Howe. He helped him find his calling.

Upon returning to the U.S., Howe enrolled at Chamberlain College of Nursing’s Phoenix campus and is set to graduate this December with a Bachelor of Science in Nursing degree.

“When I was growing up, college was something the kids in the movies did,” he said. “I never expected to go to college and I’m so proud to be graduating from Chamberlain.”

Howe credits his support network for his success in nursing school, which included faculty, his classmates and his wife, Shannon.

“I have knocked on my professor’s door at 5 o’clock on a Friday evening needing clarification on something they taught that day – without an appointment – and they will stay with me until I know exactly what I’m doing,” he said. “My professors were very supportive when my son was born during my fundamentals rotation, and I am always asked for updates on him when I run into previous professors I have taken courses with.”

The ‘one for all and all for one’ mindset also carried over from military life to nursing school.

“There is a real camaraderie with the students at Chamberlain- we’re all in this together so let’s help each other out,” he said. “I’ve made so many friends that I will keep for a lifetime. I just think that’s awesome.”

Following graduation, Howe plans to pursue flight nursing or work in an emergency department. He also hopes to go on to earn a master’s and a Doctor of Nursing Practice degree. 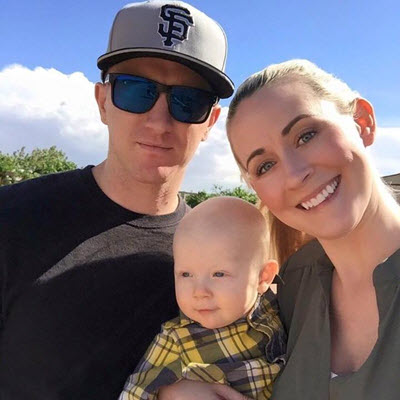