Kristine and Patrick Hawkins: All In On Service

The Hawkins are a power couple. They graduated from Chamberlain University’s Jacksonville campus on Friday, September 11 with the highest honors. Kristine and Patrick inspired each other through their nursing training to excel and perform beyond their instructor’s expectations. They have served as an inspiration to their fellow students and the greater Chamberlain community:

“As an educator, I believe that we learn from our students more than what we could ever impart to them. This sentiment could not be more accurate for students like Kristine and Patrick Hawkins. This ‘power couple,’ have been two of the most genuine, caring, and authentic students that I have ever encountered, and I will remember them long after the ink has dried on their well-deserved Bachelor of Science in Nursing degrees,” said Lois Lopez, curriculum and development at Chamberlain’s Jacksonville campus. “The Hawkins have positively impacted every life that they have touched, as no doubt, they will continue to do for many years to come. I am so very proud that they have decided to jointly enter such a noble profession, and the world will undoubtedly be better because of it.”

The Hawkins Service to Our Country

Prior to matriculating at Chamberlain, both Kristine and Patrick had distinguished careers in the military. Patrick, a 27-year Navy veteran, served as a medical corpsman on a submarine and traveled all over the world. (Including in conflict zones such as Operation Desert Storm, Somalia and the Iraq War.) Kristine, an eight-year Air Force veteran, served two tours in Afghanistan as a communications specialist.

“I did communications, intel and surveillance – some real “Secret Squirrel’ stuff,” she said. “Then I served as communications support for pararescue men, who are the combat search and recovery team. It was some rough stuff.”

The pair met on deployment in Uganda and became great friends. Several years later, they reconnected and married.

As they were both getting set to transition out of the military, Patrick knew immediately that he wanted to pursue a civilian career dedicated to service.

The Inspiration to Serve

As a kid in Detroit, Patrick Hawkins was inspired to service by his mother, a surgical technician. “She never met a person she didn’t like,” he said. With her as a role model, he performed service as an acolyte at his local parish church where he was heavily involved in community service projects. When he entered high school, he chose a vocational track that trained him to become a medical assistant. He liked helping people, it gave him a sense of purpose.

Because his family couldn’t afford college for him when he graduated, he decided to enlist in the Navy at 17-years old. “I planned on serving for four years, but I liked it so much that I stayed for 27,” he chuckled.

“When I was enlisted, my Mom got sick,” he said “I used to call her every day, no matter where I was, unless I was underwater somewhere. I loved that my Mom got to see the world through my eyes. She was so excited to hear what I was doing.”

After his stellar military service, the VA sponsored him to attend Chamberlain through a vocational rehabilitation grant.

The daughter of two native Filipinos who migrated to Guam, Kristine was always involved in extracurricular activities. A member of the GATE (Gifted and Talented Education) program at John F. Kennedy high school, she was a straight A student, involved in community service. Music was her passion:

“I joined a choir,” she said. “We went to a competition in Orlando, Florida and won first place in our category.”

Her cousin was in the Air Force, so after graduating she decided to enlist. While in the Air Force, Kristine completed an associate degree in communications and pre-requisite courses for a nursing degree. She said, “I always knew I wanted to someday pursue [nursing.]”

Patrick says the pivot to becoming a nurse happened 15-years into his military career:

“I was in Iraq, probably in 2003 or 2004,” he says. “Our battalion got bombed heavily – there were 37 sailors injured or maimed, seven died. We still had to stay out there for another nine months. As a medical corpsman I didn’t have a doctor in my battalion, I had one other corpsman to help me treat all these guys. It was helping them that made me look at the recovery process, and I knew I wanted to do something to help people with trauma when I transitioned out of the military. I wanted to work with and help veterans.”

It was Kristine who suggested he become a nurse, “I told him, you have to do this, babe. We heard an advertisement for Chamberlain on Pandora – so I called and set up an appointment for Patrick. He passed the [HESI] exam with flying colors, then the advisor asked me ‘Do you want to try?’”

After both acing their HESI Admission Test, they enrolled at Chamberlain for their Bachelor of Science in Nursing (BSN) degree track. Kristine was one cohort ahead of Patrick. For three years, they commuted from their home in Kingsland, Georgia to Chamberlain’s Jacksonville, Florida campus. After she passed adult health, Kristine decided to take a break.

“I just really knew I wanted to enter clinicals with Patrick,” she said.

Once she joined Patrick’s cohort, they thrived together, pushing each other to perform. Getting great feedback from their instructors, the Hawkins also went out of their way to help their peers perform to their highest level.

“I asked so many questions,” Kristine said. “Most of the time I was raising my hand to help a friend understand the coursework.”

After graduating on September 11, it should surprise no one, the Hawkins both passed their NCLEX on the first attempt. Kristine has found a residency with The University of Florida Health in Jacksonville. Patrick begins his Master of Science in Nursing (MSN) at Chamberlain this coming January. Kristine says she is also looking for a program to pursue a Doctor of Nursing Practice (DNP) with a focus on clinical research.

Both echoed a deep loyalty to Chamberlain. They told us that they feel they could not have achieved the way they both did were it not for the faculty and colleagues they worked with along the way.

The Hawkins have also been recently (and, deservedly) featured in the local media. Congrats, Kristine and Patrick!

Step Forward ® Chamberlain University recognizes you as special type of person – the kind who Steps Forward in times of need, to help and to heal. That is why Chamberlain University is relentlessly committed to preparing you for a career in healthcare. Because we believe that by preparing you to Step Forward in your career, you will help advance the health of people not only in your community, but around the world 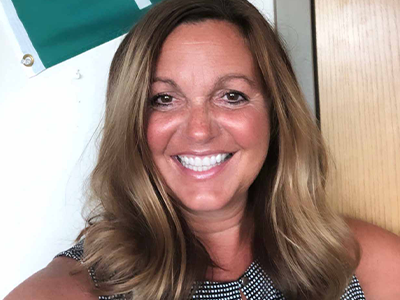